On Monday, Little J and I took a trip out to meet up with some of his buddies from school at Limes Farm in Farthinghoe, Northamptonshire.  Limes Farm in on the main road between Brackley and Banbury, but if you’re not careful (or following sat nav) you can quite easily drive past it.

It has plenty of parking around the farm, so if you don’t see any spaces by the tearoom, keep driving around and you’re sure to find one.  As with anywhere you are likely to encounter small children, it is advisable to drive at snails pace and keep your eyes open.  One of the little ones in our group had a close encounter with a reversing car due to the driver not paying attention.  Thankfully it was a miss, but close enough to mention.

During the summer holidays, children (or adults) are able to take part in the Minion Treasure Hunt around the farm.  The hunt cost £3.50 per child.  For which you are given a map, pen and instructions to find the letters around the farm which make up a six letter word.  The word can then be exchanged for minion treasure back at the farm shop.  Easy enough you might think, unless you are like me and are completely clueless when it comes to reading a map.  Thank goodness some of the other parents were more able to navigate, so off we went.

Thinking the hunt would be in a loop, we started off by turning right.  Unfortunately after two clues, we had to retrace our footsteps to find the other letters.

The map wasn’t all that easy to follow and guess work was used on a few occasions.  The farm is beautiful though, so in all honesty, we didn’t mind getting lost too much.

The minion treasure hunt took around 30 minutes to complete.  Although it is all accessible with a sturdy pushchair, it is quite undulating and proved a workout for one of the mums!  The children loved it though and found the word highly amusing.  I won’t spoil it if you have the chance to visit before the schools go back. 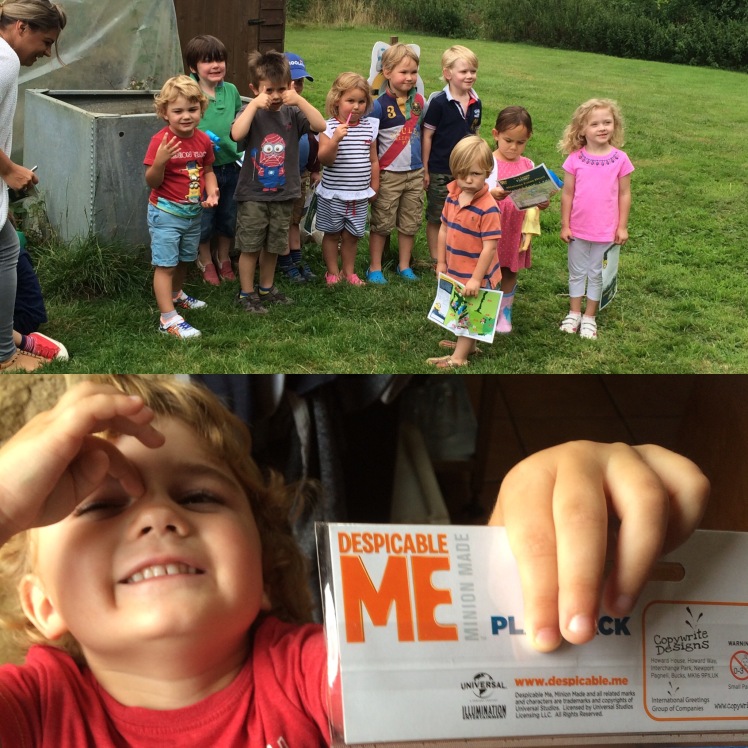 The treasure could be chosen from the chest.  A selection of Despicable Me goodies, which was very popular.  The lady behind the till told us they had seen we were a large group, so reserved a table of 15 for us on the mezzanine of the tearoom.  I think there were more like 25 of us, but it was nice of them to notice.  With 16 hungry children,  we were ready to sit down and eat.

The choice of food was good.  The wait time for the food however was far too long.  It was almost an hour.  Now I must say, there was another large group upstairs when we arrived who had already placed their food order.  For such a large quantity of mouths to feed, I was expecting a bit of a wait, but almost an hour was pushing the patience a little.  It might have been better if there was an option for us to pre-order our food when we arrived.  It might have helped out the kitchen staff.

The food was nice.  I was too hungry by the time it arrived to take a photo.  I had a salad with a cute teacup full of the soup of the day.  I have to say it was very tasty.  Such a shame about the wait.

It hasn’t put me off going back again.  I saw great intention and hard work, both great attributes for this family run farm.

Still deeply disappointed I’m not in #Tokyo preparing to run #marathon number 5; but being at home with Little J and his strange games, makes my heart melt! Where did #Bakugan come from?
Mmm ideas of how to change Tokyo 2020 into 2021 please? #tokyNO2020 #tokyomarathon
Little J’s engineering project at school was creating a marble run. According to J is it #savage 🤣🤣
Cheer me up post #boston2020 🥳🥳